We’re often asked by clients, staff and partners, from San Francisco to
London and Mumbai, why we’re called Pigtail Pundits.

Well, the answer is simple.

Pundits is synonymous with learned, scholarly, wise. These are delightful connotations that we felt we could do with when we started out in the web business in 1997.

By itself, Pundits was rather limp, we felt. Then came the brilliant suggestion of Pigtail, the tuft of knotted hair that Hindu priests wear at the back of their head. Also known as the shikhã in Sanskrit, or Choti, in Hindi. We put the two words together. Pigtail Pundits was thus christened.

Over the years, our identity has evolved. The initial focus was on the shikhã, and now it has flowered to become the tilaka.

The mysterious effect Pigtail Pundits has on people.

When we christened ourselves, we did not anticipate all the salutary things that our name would hold, or surprise us with, over the years. We knew that it was not just another name which gave away what we do.

We found that to our delight over supper one evening in 2003. We were in Santa Rosa, at a quaint Italian restaurant.

We were the guests of Bill Thompson, our associate in San Francisco. Bill’s client, Sarah and Peter of Harrison Woodfield Architects, had arranged supper for us at Luigi’s.

While we got talking, Bill popped the question: Why are you called Pigtail Pundits? We regaled him, Sarah and Peter with our answer and its curious origins.

Again at a meeting with Hogg Robinson in London, in 2001, the MD had the question flagged on his agenda. Of the 3 points to be discussed, the last one was: Why are you called Pigtail Pundits?

We now know that our name involves everyone it touches.

We now know that it is also sufficiently and universally mysterious. It stumps folks who happen to hear it. It makes them overly and irresistibly curious, about us. It makes them question how we got our name.

Have the Pigtails arrived?

We remember a meeting with a client in Chennai to discuss design and UI help on international projects, a long time ago.

We arrived early and were ushered in quickly to meet with the Vice President. We were seated in front him when the receptionist rang to find out if the Pigtails had arrived. She asked the VP to alert her when we were leaving so that she could catch a glimpse of us, Martian creatures.

We thought that this was particularly hilarious.

A shake of the head, an occasional frown, and guffaws.

We often walk into business meetings only to get the folks there shaking their heads. Understandably, they see perfectly normal folks sporting the involving and curious appellation - Pigtail Pundits. What an anti-climax. Grins…Guffaws.

We think our name bespeaks of the creative and the spiritual in us.

The name announces these traits without us having to talk a word on anything. Isn't that a great intro?

Rajesh with Bill Thompson in front of Sargam, at Walnut Creek, circa 2003.

Unni with the venerable Bill Thompson in Walnut Creek.

Unni with John and Mark Olson and The Inn San Francisco.

Unni with the great Howard Bloom, at the author's Brooklyn bedroom.

Unni with Sandy Tapper at the New York Hilton on a chilly Sunday morning.

Unni with Lee Traupel on a cold, wet day in Healdsburg, CA.

“I am the one, non-dual Brahman free from duality. May my eye of intuition open.”

The spiritual significance of the tilaka?

The U with a dot in it represents the tilaka, a mark of auspiciousness. It is worn on the forehead with sandal paste, sacred ashes or kumkum (red tumeric). While there are many forms of tilaka, the one we have in our logo is traditionally the mark of Vaishnavites, the followers of Vishnu.

The tilaka is applied at the Ajna Chakra [the pineal gland is said to be behind this spot], the space between the two eyebrows.

When you apply the tilaka, you mentally imagine:

I am the one, non-dual Brahman free from duality. May my eye of intuition open.

The spiritual significance of the shikhã?

The shikhã is a tuft of hair on the head. It is also known as choti (Hindi) and chotli (Gujarati).

According to the Vedic scriptures, the shikhã helps one attain self-discipline since it keeps the buddhi (intellect) under control.

That sort of sums up all the noble virtues that bless our craft.

Schedule a FREE Call Over Zoom

Get to Know Us Better "Can never forget the people who nurtured and taught me the importance of taking ownership; invaluable lessons that turned me into an entrepreneur."

Thank you Unni and Rajesh for investing in me.

Need I say more? Wow, Unni and Rajesh! People love you so much. Great Karma created. And yes, Pigtail Pundits has our Man Friday, Charanji. He can serve you as many cups of tea or coffee with loads of free advice and hilarious anecdotes!

"One of the finest companies that I have worked for.Hats off to Unni and Rajesh for that."

As Pauravi rightly said words are not enough, one needs to work over there to feel it.

"I never felt like I'm going to office when I was in Pigtail Pundits."

We worked together.. we learned so much.. we helped each other... we had celebrations.. we had so much fun like a child... I truly agree with Arvind Pai that one needs to work over there to feel those moments.. PP is like a family to me. Whenever I miss them I just go & meet them.. all guys who r siting over there r so wonderful.. Cheer guys !!!
Hats off to Krishnan Unni sir & Rajesh sir for creating such a amazing atmosphere... Hands down it was the best experience working with Pigtail Pundits...!!!

"I have served 2 years of my life at Pigtail Pundits with Krishnan Unni & Rajesh J Khanna when I was just starting my career as a Copywriter."

And I can honestly say it was the best decision I've ever taken! Pigtail Pundits is not just an agency, it's an institution for young, budding Copywriters, Art Directors, Programmers or SEO/SMO enthusiasts. I owe a lot to this agency and its wonderful people whom I consider a family, to help me become what I am today.

"I started my career with Pigtail Pundits under the awesome guidance of Krishnan Unni & Rajesh J Khanna."

One thing I can vouch for is that, it was the best decision I've ever taken! Pigtail Pundits is been like a school to me; I have learnt a lot that I know I would never get to know anywhere else. I owe a lot to PP. I completely recommend joining Pigtail Pundits if you want to make your base strong. There is no other agency that is so willing to share and nurture talent and help you grow more.

I started my career with PP as a fresher and now I don't regret with my decision as PP gave me opportunity to work with an global cooperate world, the years which I had spent with PP was always a good memories for me where I have learned a lot. Well what shall I say about Krishnan Unni and Rajesh J Khanna they are the real Guru's where no one can challenge them the kind of thoughts they where having against there each employee, I will say they treat each employee as there family. Hats Off to you both Unni and Rajesh for having fun and enjoying culture as work place and also thanks for shaping my career in right direction and for all help which you guys have provided. So, If anyone want to start their career Pigtail Pundits is the best choice which can fulfill their aspirations..Cheers..!!!

"PigtailPundits a place where I learn and grow as a developer." 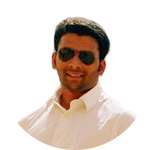 "I still remember those days when i graduated in 2008 and recession was it at peak ,when all the companies had frozen their recruitment it was PIGTAIL PUNDITS that gave freshers like us a chance and paradigm to head start with our career."

I changed 4 companies in 4 years wink emoticon and to be honest Pigtails pundits was my best experience.I learned "A LOT" from Krishnan Unni and Rajesh J Khanna and of course from my peers.The skills that i acquired during my tenure in PP has been imbibed so deeply i me that i could use it at any point of my life.Perhaps ii feel i have contributed very less as compared to what i have learned from PP.So would like to contribute as and when PP demands.

"For those who are about to start their careers, Pigtail Pundits is the place you should be opting for."

I was given the opportunity to start my career under guidance of Krishnan Unni and Rajesh J Khanna, our batch was trained with every possible skill. Everything i learnt from here, it helped to achieve a successful career. Pigtail Pundits is not a workplace, it is like a real world institution where we learn with fun. Personally whenever i get a chance to contribute, I feel blessed. A BIG thank you to Krishnan Unni and Rajesh J Khanna, it was a great learning experience. Need to learn more, will keep in touch

Schedule a FREE Call Over Zoom